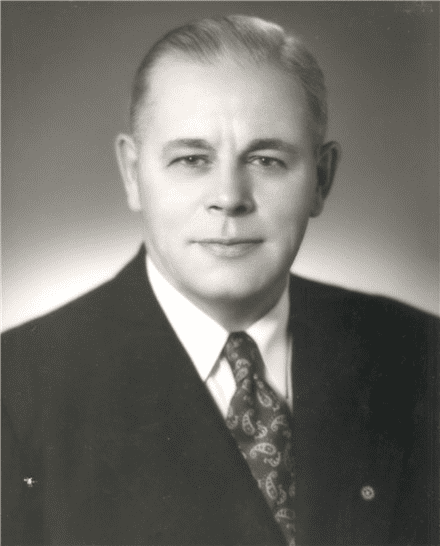 From the earliest days of the organization, Rotarians were concerned with promoting high ethical standards in their professional lives. One of the world’s most widely printed and quoted statements of business ethics is The 4-Way Test, which was created in 1932 by Rotarian Herbert J. Taylor (who later served as RI president) when he was asked to take charge of a company that was facing bankruptcy. This 24-word test for employees to follow in their business and professional lives became the guide for sales, production, advertising and all relations with dealers and customers, and the survival of the company is credited to this simple philosophy. Adopted by Rotary in 1943, The 4-Way Test has been translated into more than a hundred languages and published in thousands of ways. It asks the following four questions:

The purpose of The 4-Way Speech Contest is:
• To acquaint a large number of young people with Rotary and The 4-Way
Test
• To determine and enhance Rotary’s commitment to our youngsters
• To heighten awareness of Rotary additionally among parents, schools and
community
• To recognize, encourage and reward hard work and accomplishments of
youngsters

This month we celebrated Presidents’ Day. Last week we learned about the holiday and a little bit about George Washington. This week I thought we should learn a few facts about Abraham Lincoln. Abraham Lincoln presided over the United States during the Civil War which settled the question of whether the federal or state governments were the more powerful form of government. His election demonstrated how divided the country was and was a harbinger of things to come. The votes for Lincoln came from the northern and western states. The south did not vote for Lincoln and began to secede from the country just after Lincoln’s election.

Although the United States seceded from England by stating that “all men are created equal”, the Constitution was fundamentally at odds with the Declaration of Independence because it did not abolish slavery. During his first term as President, Abraham Lincoln issued the Emancipation Proclamation on January 1, 1863. The proclamation stated “that all persons held as slaves” within the confederate states “are, and henceforward shall be free.” Although the Emancipation Proclamation did not end slavery in the United States, it fundamentally transformed the character of the Civil War. Slavery was formally abolished by the 13th Amendment of the Constitution which was ratified on December 6, 1865. Sadly, President Lincoln was assassinated before its passage. Abraham Lincoln made several other notable additions to the United States. His administration set up our national banking system, and the Department of Agriculture.

The following are a few interesting facts about President Lincoln. Abraham Lincoln was our first fully bearded president. He was also our tallest, measuring 6 feet 4 inches tall. President Lincoln often stored things like letters and documents in his stove-piped hat. Finally, in bitterly ironic coincidence, on the day he was shot, Lincoln told his bodyguard that he had dreamt he would be assassinated. Although his presidency was short, Abraham Lincoln’s legacy is towering.

Visiting PP Mary Ann Avnet and her husband Steve joined us for lunch.

Randy Donald reminded us of the Cigar Social at PP Jim Hunt’s House.

President Jim presented our speaker Dr. Atkinson from the UNLV Medical School with our “Share What You Can Award.”

PP Steve Linder walked away with the Lawry’s Bucks.

PP Karen Whisenhunt gave us the results from the Mayors Cup.

Our visiting Rotarian from Long Beach missed the chance at the Joker.

Our Sergeant At Arms Jaime Goldsmith finally slowed down for a picture.

Luci Parodi presents Major Kinnamon with a check for over $9,000 from our canned food drive.

Jordan Micev was joined by his son for fellowship and lunch.

Dave Thorson reminded us of the upcoming Wetzel Awards.

Carey Grohs sold out the next 25 Club get together at the LV Aviators Ballpark.

Bob Werner and Jerry Engel performed with song and a harmonica.

At President Jim’s head table was the founding Dean of the UNLV School of Medicine Dr. Barbara Atkinson (R) and her assistant JoAnn Prevetti (L).

PE Jackie Thornhill presented a Community Grant check in the sum of $2,571.80 to Michelle Johnson of Junior Achievement. Michelle presented Jackie with a painting from her students.

PE Jackie Thornhill presented a Community Grant check in the sum of $2,571.80 to Michelle Johnson of Junior Achievement. Michelle presented Jackie with a painting from her students.